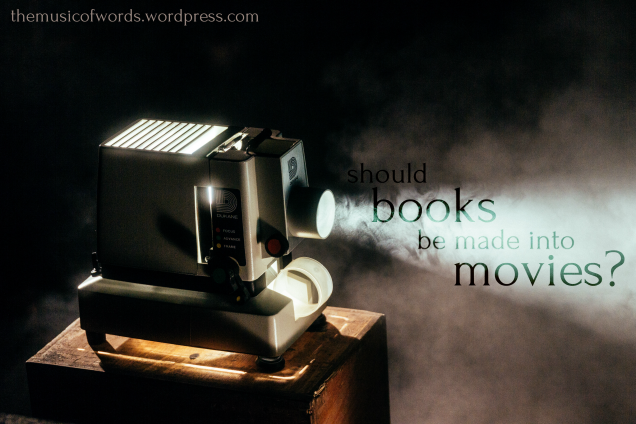 I’ve been wanting to do a discussion post where I can hear your thoughts. So, after watching the third Hobbit movie yesterday, I wanted to ask you the big question: should books be made into movies? And what are the pros and cons of doing so?

I think every author, at least once, dreams of seeing their novel on the silver screen. And yet, readers are almost always unsatisfied with the job that the movie producers do.

So, should books be made into movies?

Ultimately, I want to hear your thoughts & your ideas, but I’m going to share some of the pros and cons of movie adaptations. Tell me if you agree or disagree with them!

PROS OF A MOVIE ADAPTATION

CONS OF A MOVIE ADAPTATION

Obviously, there are good and bad things about movie adaptations. So I want to hear your opinion:

Should books be made into movies? What movies are actually better than the books, if any? What are your favorite and least favorite movie adaptations? What components are needed in a good movie adaptation? If you could make any book into a movie, what would it be, and what would you change?

Ramble away, and we’ll discuss it!

Hi! I’m Lana, a young writer, singer, and Christian, as well as a couple of other things. I’ve been reading and writing since as long as I can remember, and I love to write novels and other such writing-y things.